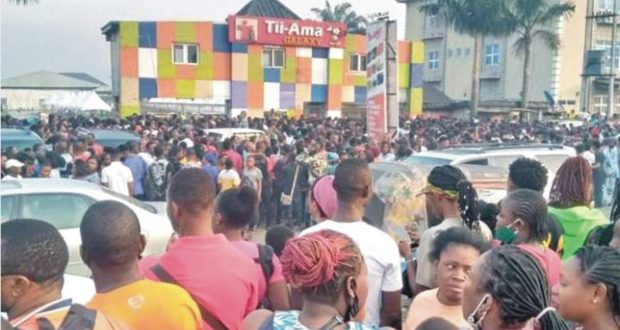 Following the stampede which claimed some lives in one of its markets in Obio Akpor, Rivers State on Tuesday,, Inksnation, owners of Pinkcoin has officially suspended its nationwide Inskmart for seven days.

Thousands of Pinkcoin members, an online blockchain digital assets designed for giving charity, were gathered at the scene to exchange their Pinkcoin for goods when the stampede occurred.

The officials could not control the crowd that converged on the centre at Rumudara leading to the incident.

A statement on one of the official platforms of the Inksnation Tuesday night, however stated that the suspension was due to the wild spread looting of the goods at most centres.

The statement reads “Inksmart has been officially suspended in all states with immediate effect because hoodlums are hijacking it”.

There has been chaos in all the centres of the inksmart nationwide especially in Taraba State where hoodlums invaded the venue and carted away the goods.

But, the incident at Obio Akpor yesterday, we gathered made it expedient for the management of the online block chain digital assets to suspend the market.