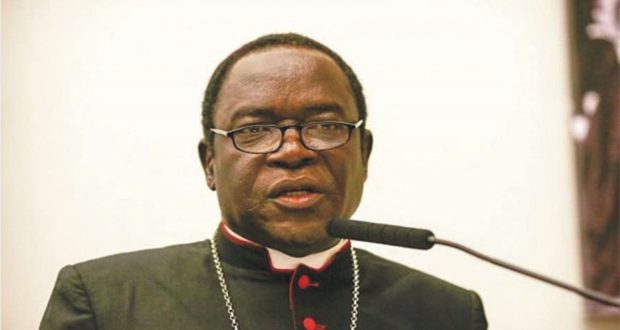 Posted by: The Port Harcourt Spectator in News 11 days ago 0 168 Views

The lingering crisis between Catholic Bishop of Sokoto Diocese Matthew Kukah and the Muslim Solidarity Forum (MSF), on Tuesday took a different dimension as the Islamic group warned the cleric to “quickly and quietly leave” Sokoto, the seat of the caliphate.

MSF said Kukah’s “innuendos and parables” in his speeches  were against Islam and its adherents, adding that they were provocative.

The threat by the forum came barely 24 hours after Kukah accused the Jama’atu Nasril Islam (JNI), the umbrella body of Muslim groups, of inciting violence against him over the Christmas message

The cleric, according to reports had in the message accused the Muhammadu Buhari administration of   not living up to expectation due to mounting economic and security challenges confronting the nation.

He said Buhari was “institutionalising northern hegemony against national interests,” adding that if a President of non-Northern extraction had done a fraction of that, he would have been removed from office via coup de tat.

The cleric, who later said he was misquoted in the portion of the message about coup, maintained that that  “he is more interested in how religion can be used to foster unity.”

His words: “The Secretary-General has accused me of being an enemy of his religion, Islam. He accused me of what he calls, firing an arrow at the heart of Islam and Muslims in Nigeria. He says I have been accorded respect and accommodated in Sokoto and I have turned around to bite a finger that has fed me.

“He poses a question: How can Muslims continue to be hospitable to one who proves to be an ingrate many times over? How can Muslims be comfortable in associating with a bitterly vindictive person disguised in the garb of a religious cleric?

“I can only take this statement from the secretary-general of JNI as a clear case of incitement to violence against me.”

But at a news conference in Sokoto, Sokoto State, the MSF aligned with JNI, accusing Kukah of  not only unable  to “appreciate in his Muslim hosts or their religion,”  but disparaging them with  “provocative and uncouth language..”

Acting Chairman of the forum, Prof. Isah  Maishanu, described Kukah’s comments  as  an attempt to break the age-long peaceful coexistence between the predominantly Muslim population and their Christian.

Although Maishanu said the MSF was not holding brief for the President, he   urged the Catholic mission to stop Kukah’s “malicious vituperations” against Islam and Muslims.

He alleged that the cleric’s comments signified a deeply-rooted and blind pathological hatred for Islam.

To buttress the group’s belief that the Bishop disliked Islam, Maishanu alleged that Kukah   opposed   Shari’ah law’s implementation in some Northern states claimed that Christians were being denied places of worship and protested in the heart of Sokoto over the killing of a Christian priest.

His words: “Kukah who lives peacefully and happily at the centre of the seat of the caliphate for almost a decade now, enjoying the peaceful atmosphere of the city that is founded on the teachings of Islam and benefitting from the goodwill of Muslim leaders right from childhood and up to this moment could not see anything good to appreciate in his Muslim hosts or their religion, to disparage them.

“Rather, he is always using provocative and uncouth language. His callous statements and acts of hatred is unbecoming of someone who parades himself a secretary to the National Peace Committee and a member of Nigeria Inter-Religious Council (NIREC).

“We  therefore  call on Kukah to immediately stop his malicious vituperations against Islam and  Muslims and tender an unreserved apology to the Muslim ummah or else, quickly and quietly leave the seat of the Caliphate, as he is trying to break the age-long peaceful coexistence between the predominantly Muslim population and their Christian guests.”

Maishanu noted that Muslim leaders out of magnanimity, shown goodwill to the bishop, adding that he was taking their kindness for granted.“ To Kukah, the Acting MSF chairman said: “ We call on him to act as Bible commands’ seek ye truth and it shall set you free’, by embracing the pristine monotheistic teachings of Jesus, son of Maryas, finally revealed by Allah the Almighty Lord, through the last Prophet  ,Muhammad.”

2021-01-13
The Port Harcourt Spectator
Previous: FG to borrow N5.6tr to finance 2021 budget
Next: Trump declares state of emergency in DC