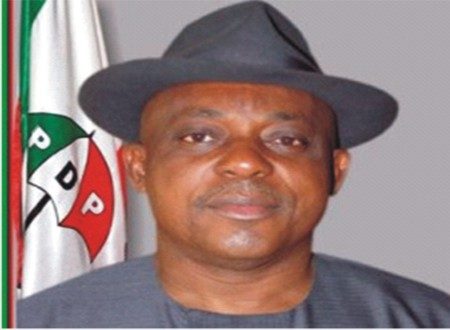 Posted by: The Port Harcourt Spectator in News, Politics 8 days ago 0 82 Views

Following  allegation of financial fraud to the tune of N10billion levelled against the National Chairman of the Peoples Democratic Party, PDP), Prince Uche Secondus by Kassim Afegbua, the PDP boss has  demanded a retraction of the story and payment of N1billion in damages from Afegbua.

Secondus through his lawyer, Emeka Etiaba, threatened to take legal action against Mr. Afegbua within 48 hours if he fails to meet his demands.

Afegbua had accused Secondus of mismanaging the sum of N10billion which he claimed accrued to the party from the sales of nomination forms for the 2019 election; a claim denied by party spokesman, Kola Ologbondiyan, who noted that the party realized the sum of N4.6billion and not N10billion.

The PDP boss noted that Afegbua, a former Information Commissioner in Edo State, had in two national dailies as well as in a petition to the Economic and Financial Crimes Commission (EFCC), and Independent Corrupt Practices and Other Related Offences Commission (ICPC), said that “much of the financial transaction of the PDP under Prince Uche Secondus have been shrouded in mystery.”

It would be recalled that Afegbua also accused the Secondus leadership of using the bank account of Morufu Nigeria Limited in the sale of nomination forms in 2019, instead of the party’s account.

However, Secondus, in a letter from Emeka Etiaba Chambers, and addressed to Afegbua through his counsel, Kayode Ajulo and Co, demanded the sum of N1billion from Afegbua within 48 hours failure to which he will be sued for libel.

The letter reads in part, “The above publication of yours portrays our client in a bad light and gives notice to the whole world that our client is a fraudster who is incapable of holding the exalted office of the national chairman of the PDP.

“The two publications made by you were given prominence on the front pages of the Newspapers you employed for your defamatory actions and the publications were widely circulated and read.”

The letter continued, “Your publications which you know to be false have therefore brought him to odium and has challenged his right standing in the society as a trustworthy character.

“The publications were read worldwide, and most especially in all nooks and crannies of Nigeria, and this fact has been confirmed by the phone calls that have trailed your publications.

“Take notice that if you fail to retract your said publications, apologize to our client in the said newspapers with the same prominence with which you published the offensive statements and pay the sum N1billion to him as damages (all within 48 hours from the date hereof), we shall proceed to institute an action to seek redress from a court of competent jurisdiction”.

Meanwhile, when our correspondent contacted Afegbua for his reaction, he had this to say: “When I receive the letter, I will respond to it. I will consult my lawyers. I haven’t received any letter. But I cannot be intimidated or distracted from pursuing accountability in PDP. That will be my initial reaction.”