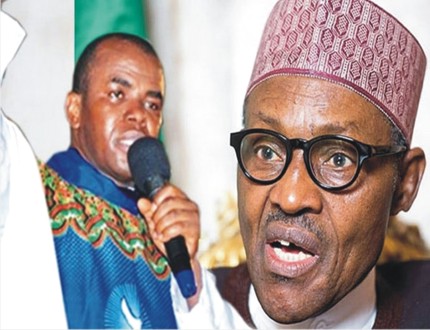 Posted by: The Port Harcourt Spectator in News, Politics 5 days ago 0 94 Views

Reverend Father Ejike Mbaka, the Spiritual Director of Adoration Ministry, Enugu has said the statement by Garba Shehu, the senior special assistant to President Muhammadu Buhari has proven that the president didn’t give him money.

He also said that the presidency was worried that he blessed the leader of the Indigenous People of Biafra, IPOB, Nnamdi Kanu.

Mbaka who was reacting to the statement by Shehu that he (Mbaka) is criticising Buhari because the president didn’t give him contracts, said he only recommended three people to the presidency for a project to end insecurity.

He said: “If I talk, you talk, because the government is paying you? Do you know how many people I am paying? I am an employer.

“Someone said he gave father Mbaka a contract; I started laughing. I am not here to defend anybody’s stupid allegation but God used that man (Garba Shehu) to tell the world that the Buhari government is not giving me money. Shehu, God bless you for telling everybody you didn’t give me a contract.

“The three men he (Garba Shehu) talked about..these were the three men that I recommended to the government; they wanted to tackle insecurity; they had the gadgets. That was during the first administration.

“They had a platform to end insecurity in one month. I handed them over to the government people. I didn’t know them. They said they had all it takes to revive the oil apparatus and get the youths employed; the government rejected their offers.

“If they are worried I am blessing Nnamdi Kanu, is he not blessed, is he not my brother spiritually, is he not my son? What’s their problem? Let them be careful with their choice of words. If anyone tells the truth, he becomes a terrorist, shame on you…. I do my charity without assistance.”