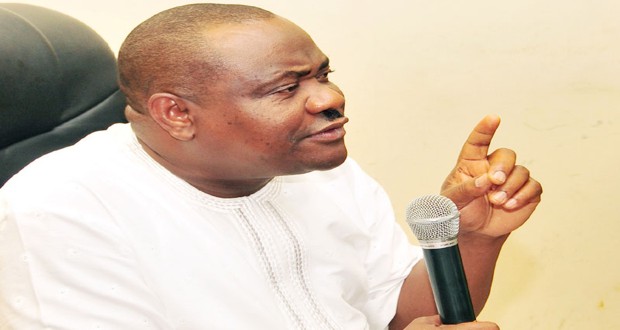 This is even as he has  recognised the Amayanabo of Okochiri, King Ateke Tom as a Second Class Traditional Stool.

This was done during a solidarity visit to the Rivers State Governor by the Wakrike Ethnic Nationality in Okrika Local Government Area of Rivers State on Wednesday.

And in appreciation of his performance, the people endorsed Governor Nyesom Wike for a second term.

Speaking on behalf of the Wakrike Ethnic Nationality, Chairman of the Okrika Divisional Council of Chiefs, Chief Sunday Kalaowolo, said the Governor had always treated Okrika people fairly through projects execution and appointments.

“As the political drumbeat starts in 2018, we the Wakrike people under God, ask you to run for a second term in office. We will lay down our lives , not only to vote for you, but to defend our votes. All Okrikans are solidly behind you for 2019. We are sending notice to your detractors that there will be no vacancy in Government House Port Harcourt by 2019,” he said.

On his part, the Amayanabo of Ogu , King Nicholas Nemenebo said the Wakrike Ethnic Nationality was 100 percent behind the Rivers State Governor.

Also speaking, a former Minister of Transport, Dr Abiye Sekibo, said the people were firmly behind the Rivers State Governor for 2019 and would work diligently for the actualization of his second term.

In his response Wike assured the people of Wakrike Ethnic Nationality that he would continue to deliver quality projects and programmes in the area.

He said the Wakrike Ethnic Nationality stood by him in 2015 during the governorship election, hence his commitment to the development of the area.

He said if the forthcoming elections would be on the basis of votes, stressing that it would be difficult for the APC to win anywhere in the country.

The governor said due to the failure of the APC, the party was planning to rig the election.

“They are planning to rig and they say nothing will happen if they rig. In Rivers State, something will happen. Be prepared to defend your votes so that nobody will take your mandate and give to another perso,” he said.

The governor appealed to Okrika people to resolve the issue of the Amayanabo of Okrika.