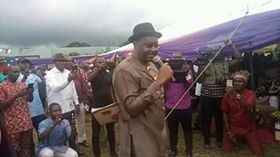 Posted by: The Port Harcourt Spectator in News, Politics 10 days ago 0 38 Views

…Challenges Wike to make it free and fair

Senator Magnus Ngei Abe, former representative of Rivers South-East Senatorial District at the National Assembly, has called on Rivers people to come out en masse and participate in the forthcoming local government council elections, in order to be involved in a democratic process to elect who represents them at the grassroots.

Abe made the call while speaking at a meeting of stakeholders of the All Progressives Congress (APC) in Port Harcourt recently.

The senator recalled that Governor Nyesom Wike had severally advocated for free and fair elections devoid of federal might and force to influence election outcome, therefore it behooves on him to justify his mantra by giving the Rivers State Independent Electoral Commission (RESIEC), a free hand to conduct, free and credible polls.

He objected to some dissenting voices in the All Progressives Congress (APC), that wanted members to boycott the election, insisting that political parties are formed as a vehicle whereby, members could aspire and be elected to serve their people and condemned such insinuation as counterproductive.

Abe said, “the fact that we have different political parties does not mean that we are suddenly, no longer Rivers people. It is not correct, and that is not how to grow the state”.

“The requirement to contest in an election is that you should be a member of a political party and we are members of the All Progressives Congress (APC), and therefore eminently qualified to contest in the elections in Rivers State. It is our State.

The purpose of election is to serve the people. If they pick our people, they should be allowed to serve”.

“We are challenging the governor of Rivers State to organize the election in the way he said he wanted elections to be organized and let Rivers people go out and contest. Test their popularity for the people to decide on those they want to run the affairs at the grassroots. That’s the purpose of politics”.

“Wike has always talked about how he wants free and fair election without federal might and force, this is the time to show working”.

“We are challenging the Rivers State Independent Electoral Commission (RSIEC) to make the election free and fair, let Rivers people go out and contest.

“I want to encourage any politician who wants to aspire to an office; this is the time for you to test your teeth. Even though you don’t win, at the end of the day you learn valuable lessons on how to plan, organize, and grow in your political career”.

He however, vowed to continue in the pursuit of justice in the APC in order to promote a better model of politics in Nigeria”.