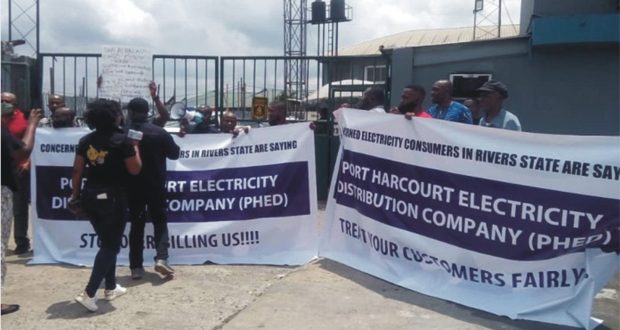 Posted by: The Port Harcourt Spectator in Business, Metro, News 23 days ago 0 69 Views

Residents of Port Harcourt, the Rivers State capital, Wednesday, staged a protest at the corporate headquarters of the Port Harcourt Electricity Distribution Company, PHED, along Moscow Road to register their displeasure over the exorbitant bills they pay as tariff for electricity they hardly consume.

They also said the company has failed to entertain their petition on the matter.

One of the convener of the the protest, Korfi Bartels said the match is to draw attention of the public to outrageous Billings from PHED.

“Personally I have received a lot of bills from PHED and I feel are outrageously higher than what I should be paying on a normal basis and I am aware that there are several residents of Port Harcourt and Rivers State that have received bills that are  very high than normally what they should be paying , so I think as a corporate entity the port Harcourt Electricity Distribution Company needs to listen to the views and cries of their customers” .

“We ask PHED to follow the law creating the electricity sector. This overbilling will have to stop and we are equally saying that PHED must obey the agreement that it into being or they park and go”.

On his part, a human rights lawyer, Barrister OC Higher King said PHED has not right to disconnect it’s customers without three months notice in accordance with section 94 of the Electric Sector Power Reform Act, 2005.

“We are saying that PHED is worse than the disbanded E-crack Unit of the Police that have been extorting from Rivers people. When the former President Goodluck Jonathan was in power, he privatised electricity sector and part of the key agreement between the distribution companies and Consumers is that they must provide free electricity poles to Consumers.They must provide meters free.

“Several years down the line, this failed company could not provide meters, but when they came in newly, they brought standard meters to very few places. Something that was meant to be given for free, they sold it for outrageous amounts to consumers.”

He said,” it’s time Port Harcourt people begin to hold PHED accountable for their atrocities. For instance, you cannot cut or disconnect somebody’s light without the three months statutory notice which is covered by section 94 of the  Electric Power Sector Reform Act 2005. You must give that notice before you can disconnect somebody’s electricity. So policemen, take note, don’t join PHED in committing crime”.

Reacting to the situation, Acting Corporate Communication Manager, Chioma Aninwe, said it is consumers’ right to approach PHED Head office to report issues on over billing or any other challenges faced for rectification.

She advised consumers not to pay money for metering and report any PHED Staff demanding money from them.

“What we need to understand is, in the issue of tariff, the tariff is set by Nigeria Electricity Regulatory Company where PHED have no hand, we operate under a principal. The consumers maybe uninformed that there is increase or adjustment in electricity tariff.

“Every customer has right to know what they are being billed, what one kilowatt of energy costs, and it is the duty of every PHED Staff to educate consumers in the field. They should not wait for them to come to the customer care before getting any necessary information they need. Every PHED Staff should be an ambassador.

“We have a metering gap of one million and federal government gave us seventy-nine thousand. It can not go round to all four states, what we did was to map out some places because we are covering Bayelsa, Akwa Ibom, Cross Rivers and Rivers State, the meter can not go round.

“What we are also telling consumers is that if the meters are not getting to them, they should use Meter Asset Provider (MAP) which they will only pay the vendor, nobody pays PHED for meter. We are also informing consumers that if anybody who claims to be PHED Staff demands for meter payment under mass metering scheme, please do not pay, but report such person.

“Our contact phone numbers are on all PHED vehicles, call the corruption hotlines and we will get to the root of the matter because we have zero tolerance for corruption in this management”

The protesters in their hundreds moved from the Sharks Stadium in old Port Harcourt township to the PHED office.