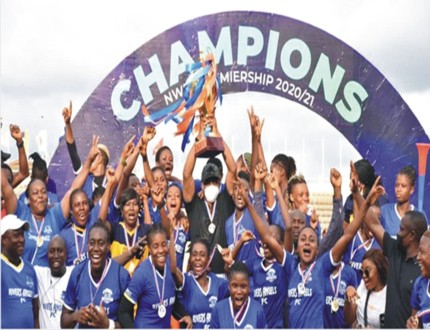 Posted by: The Port Harcourt Spectator in News, Sports 12 days ago 0 84 Views

The governor said it is gratifying to see Rivers Angels defeat Sunshine Queens 4-0 in their final game to emerge the winner of the 2021 NWFL Premiership Super Six.

“The Government and people of Rivers State congratulate Rivers Angels for emerging as worthy winners of the 2021 NWFL Premiership Super Six. We applaud your spirited performance throughout this season.

“This is not just an honour to Rivers State alone , but to our country which you will be representing in the prestigious CAF Women’s Champions League later this year. Rivers people are delighted by your incredible achievement.”

He noted that Rivers Angels’ ability to retain the NWFL title stands as a testament to all the hard work the team and its management have put in throughout the season to achieve another magnificent season of winning.

Governor Wike charged those saddled with the responsibility of getting the team prepared for the upcoming CAF Women’s Champions League to immediately commence preparation to win the coveted CAF cup.

“You have made every one of us in Rivers State and the nation glad. We, sincerely pray that this achievement will spur you to strive for a more prominent continental accomplishment. You have conquered the Nigerian football league, now go and conquer the African continent.”

2021-04-26
The Port Harcourt Spectator
Previous: Onuachu open to Arsenal move
Next: Ozil still earning 90% of his Arsenal wages’ at Fenerbahce