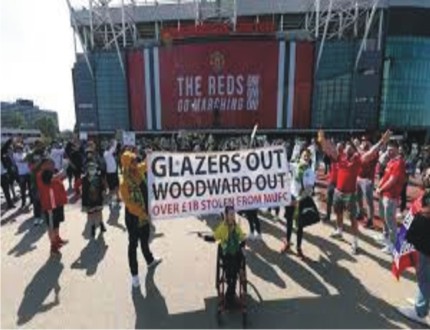 Posted by: The Port Harcourt Spectator in News, Sports 5 days ago 0 49 Views

Former player, Gary Neville has said Manchester United’s owners, the Glazers, are to blame for fans’ protests on Sunday, ahead of the Liverpool clash which eventually led the match being postponed.

Supporters began protesting outside The Lowry hotel, where Ole Gunnar Solskjaer and his team were preparing for the game.

More protests broke out at Old Trafford and hundreds of fans broke into the stadium and reach the pitch, before being escorted out by police.

It was confirmed on Sunday evening the match would be postponed and will be rescheduled in due course.

“This is a consequence of the Manchester United owners’ actions two weeks ago. There is a general distrust and dislike of the owners, but they weren’t protesting two or three weeks ago.

“The Glazer family are struggling to meet the financial requirements at this club and the fans are saying that their time is up,” Neville, who was to cover the match for Sky Sports, said.

Manchester United are facing a points deduction, as Premier League and FA rules contradict one another on postponements.

According to the FA’s rulebook in section 8.3.4, it states that United could be found to have been at fault for the match not going ahead and see Liverpool awarded three points.